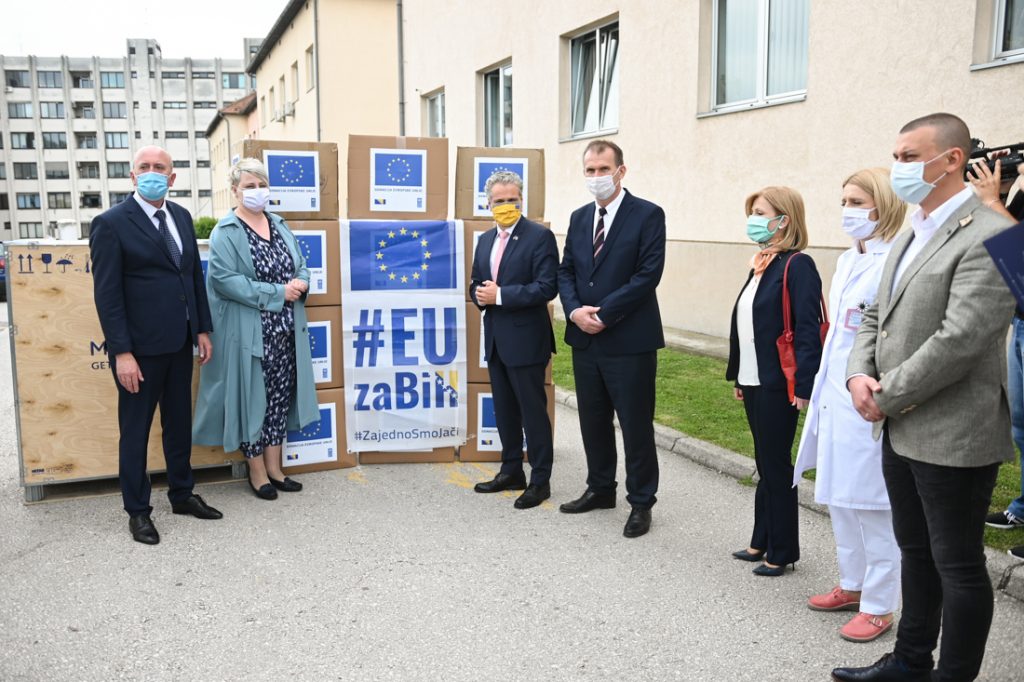 Podrška u upravljanju migracijskim tokovima The Head of the EU Delegation and the EU Special Representative in BiH Ambassador Johann Sattler, delivered medical equipment to the University Clinical Ce...

The Head of the EU Delegation and the EU Special Representative in BiH Ambassador Johann Sattler, delivered medical equipment to the University Clinical Center Tuzla and officially opened the newly constructed building of the Municipal Court during his visit to Tuzla on Friday, June 5, 2020.

Medical assistance to the University Clinical Centre Tuzla includes a respirator for intensive care and anaesthesia, as well as a larger amount of protective suits and masks, which is part of the overall EU assistance for BiH in the fight against COVID 19, worth €7 million.

“The European Union is the most loyal partner of Bosnia and Herzegovina and its citizens. We are with you during the Covid-19 crisis, as we were after the 2014 floods. I am very happy to have the opportunity today to hand over such important equipment to the Tuzla Clinical Centre,” said Ambassador Sattler.

The director of the University Clinical Centre Tuzla, Vahid Jusufović said: “The donation also includes a device for general anaesthesia, which is also a respirator and it is one of the top quality medical equipment. We also received a significant amount of protective medical equipment that will come in handy in this current state as well as in the following period”.

After visiting the Clinical Center, Ambassador Sattler officially opened the newly constructed building of the Municipal Court, and visited the renovated premises of the Cantonal Court and the Cantonal Prosecutor’s Office in Tuzla. The construction and renovation of the three judicial institutions were realized with a grant of the European Union in the amount of €4.5 million. This is the largest investment in judicial infrastructure in a single location in BiH.

“Today I congratulate citizens and court officials on the opening of the new Municipal Court.  The EU has played its part by providing these facilities, now we expect the judiciary to improve results and deliver justice to all citizens. We expect more concrete progress and a step forward when it comes to the judiciary and the rule of law in BiH in general, because that is ultimately the essence of European integration, its beginning and a precondition for opening chapters concerning the rule of law. These are the last chapters to be closed, so we must see the improvement of the work of the judiciary and the rule of law in BiH as well, “said Ambassador Sattler.

President of the Court Muhamed Tulumović said: “Every developed democracy is founded on the rule of law and BiH, as a young democracy, burdened by the process of transition and the consequences of war certainly needs support to the third pillar of governance. That is why we are grateful to our partners, who allocated funds from taxpayers of EU member states, to help BiH on its path to full EU membership,” he added.

The ceremony was attended by the Cantonal Prime Minister Denijal Tulumović, Mayor of Tuzla Jasmin Imamović and Cantonal Minister of Justice Elvir Hercinović who underlined the importance of an independent, efficient and transparent judiciary and thanked the EU for its continuous support to BiH in the rule of law sector.

The construction of Tuzla’s Municipal Court and renovation of the premises of the Cantonal Court and the Cantonal Prosecutor’s Office in Tuzla is a part of a wider EU assistance package of over €20 million for the rehabilitation and modernisation of courts and prosecutors’ offices across BiH.